In case you haven’t worked it out yet, I’m a BIG fan of Natural Stone – and educating people about its use in their homes, and I hope you enjoy today’s offering, “Mad About Marble”.

From the shimmering aura of the Taj Mahal to the humble floor of your home’s bathroom, marble is one of the world’s most revered and useful natural materials. Tune into any kitchen design conversation and you’ll encounter a sharp divide over the use of marble benchtops. Some people wouldn’t dream of designing a kitchen without it. Others wouldn’t dream of using it, citing marble’s imperfections and fragility – and many are caught somewhere in the middle… in love with its irresistible appeal, but uncertain if it’s the right choice for them.

In an attempt to create the “perfect” material, legions of synthetic products claim to look “just like marble,” but marble enthusiasts aren’t swayed. Few stones can match the warm glow, the softly flowing colors, the timelessness, and the authenticity of marble. There’s good reason this stone has been used for over 5,000 years.

Marble is a metamorphic rock; it once was a different kind of rock, and was then transformed by a change of circumstance. Before marble becomes marble, it is first limestone, which forms on the shores and floors of tropical seas. Limestone is an accumulation of shells, shelly fragments, microscopically tiny shells, and dissolved shells. Depending on the conditions at a particular beach or sea, limestone’s shelly sediment may be punctuated with occasional layers of clay or lenses of sand. But by and large, limestone is an assortment of shell-remnants, which are made of the mineral calcite.

The tropical shoals that give rise to limestone do not stay peaceful indefinitely. Oceans are basically geologic conveyor belts. The ocean floor slowly spreads apart from the center and slips underneath continents at the edges, gradually rearranging the map of the world.

When a limestone seabed gets dragged down into the Earth’s crust, the additional heat transforms the calcite grains and fuses them together tightly. The dynamic action of rock layers as they become buried, twisted, and shoved around causes the original flat-lying layers to bend, buckle, and swirl together. A rock in this heated state doesn’t melt. It’s simply warm and flexible, much like a chocolate bar left in your pocket. This process of heating and warping is responsible for marble’s trademark aesthetic of gracefully flowing bands of color. The grey swirls in marble are simply clay layers that got folded, smeared, and re-folded into the marble like a ribbon of chocolate infused throughout fudge ripple ice cream.

PATTERNS AND COLOURWAYS GIVE MARBLE VERSATILITY AND CHARACTER

Part of what makes natural stone so appealing is the huge range of colors and variations expressed in solid rock. On one hand, these patterns tug on our heartstrings and offer aesthetic possibilities. On the other hand, each of these variations has its root in some sort of geologic process.

Most marble is white. The classic, white marble is pure calcite, without intervening minerals to lend it color. Yule and Thassos marbles are well-known examples of pristine white marbles. Marble can take on a delightful range of hues and textures. Pink marble is tinted by iron oxide, as is golden marble. Green marble and deep red marble contain serpentine, rich in magnesium. Fossil-rich limestone becomes graphite-infused marble, as the carbon in fish, algae, or seaweed reverts back to the elemental carbon in graphite when the rock is heated. Graphite-rich marble is steely grey with a metallic glimmer.

A marble breccia is formed when the stone fractures underground, which can happen if a stone lives in a fault zone. Mineral-laden groundwater comes to the rescue, filling in the voids and patching the fragments back into a solid mass, while creating a spectacular pattern at the same time. Arabescato is a beautiful example of a marble breccia.

IT’S IMPORTANT TO UNDERSTAND THE PROPERTIES OF MARBLE

The mineral content of marble is the same as the limestone it came from, and both of these stones are made of calcite, AKA calcium carbonate, AKA CaCO3. Calcite is one of the more common minerals on Earth’s surface; in addition to limestone and marble, calcite is the primary ingredient in travertine and onyx.

Calcite has a few properties that you should know about before you fall head over heels in love with a stunning marble slab. Calcite is 3 on Mohs hardness scale, which means it will get scratched by knife blades, ceramics, and a cast iron skillet accidentally slid across the kitchen island.

Calcite is also chemically reactive with common acids, such as those found in lemonade, wine, and colas. When acidic liquids land on a marble slab, a tiny amount of the stone is dissolved, or “etched.” This doesn’t affect the integrity of the stone, but it does leave a slight change in the color and/or luster of the stone. On a polished stone, an etch looks like an unpolished area.

Etches can be polished out, or they can be left alone and considered part of the natural patina that marble will acquire over time.

Marble is ground up into antacid tablets because calcite neutralizes acid, which makes your stomach feel better. That also explains why acid makes a mark on marble. The marble reacts with the acid, neutralizing the acid, but damaging your countertop in the meantime. Ironically, when your teenager dribbles pickle juice on a brand new countertop, you may find yourself reaching for the antacid, triggering the same chemical reaction both on the countertop and in your digestive tract.

The last piece of potentially bad news is that marble can form “star cracks” or “stun marks” if a heavy, hard object falls on it. Star cracks look like small, light-colored areas where the impact occurred. This is usually an aesthetic issue, not a structural one, but if an impact occurs at the edge of the stone, it can chip or flake.

A common misconception is that marble stains easily. However, this is actually quite rare. The metamorphism that bakes the stone also knits the minerals together tightly. Porosity for marble is similar for that of granite. That said, the porosity of all stones varies, so check the stone specs and do your own tests with a sample of stone. Marbles are typically sealed to reduce the likelihood of staining. Alas, sealing does not make marble any less prone to etching, I’m sorry to say.

Now you can see why some people love marble while others think that marble-lovers are crazy. To some, the nicks and etches on a marble surface add character and mark the passage of time in a busy household. To others, each blemish resonates as a personal loss. Which way do you see it? This is an important question to consider before you head to the slab yard. 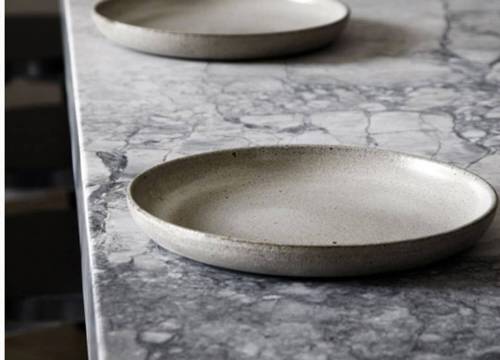 While marble is primarily made of calcite, it’s possible for the original limestone to have occasional layers of sand or chert (chert is a marine rock made of pure silica). These interlopers turn into areas of quartz as marble undergoes metamorphism. The end result is a stone that is mostly calcite with some quartz. This combination of ingredients has kicked off industry-wide confusion, because calcite and quartz have distinctly different properties but they look alike.

LIMESTONE IS SOMETIMES CLASSIFIED AS MARBLE

The term “marble” is often applied broadly rather than literally. Many stone restoration professionals categorize marbles, limestones, and travertines together as a family of stone because they require similar maintenance and refinishing techniques. Polished limestone is sometimes called marble. While there’s not a huge difference between the two, marble is much denser and therefore is resistant to staining. If a slab has fossils, shell fragments, or has open pockets within the stone, it is limestone.

Many stones classified as black marble are actually black limestones. This is particularly true for dark colored stones with stark white veins, like China Black, Dynasty Brown, or Nero Portoro. Because marble has origins as a fluid, heated rock, its stripes and veins are usually soft, flowing, and curved rather than angular.

MANY WAYS TO BRING MARBLE INTO OUR LIVES

Marble remains a popular choice for countertops, splashbacks, bathrooms, tabletops and flooring. Its versatility makes it at home in an ancient Greek sculpture, in a lavish hotel lobby, or on a hardworking kitchen island. Marble also finds its way into our lives as household objects like cheese boards, rolling pins, vases, and lamps.

Despite the emergence of marble lookalikes, there’s nothing quite like the real thing. Real marble has qualities that cannot be replicated in a lab. Marble has been a metaphor for worship, reverence, and beauty for millennia. Its ability to do that is all the more appreciated today.

Article reproduced from Use Natural Stone (with thanks). View the original article here. 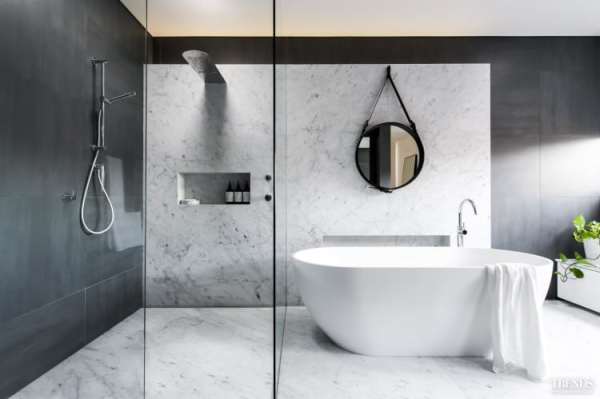 Subscribe to our blog “The Designer Files” to receive all new articles straight to your inbox.